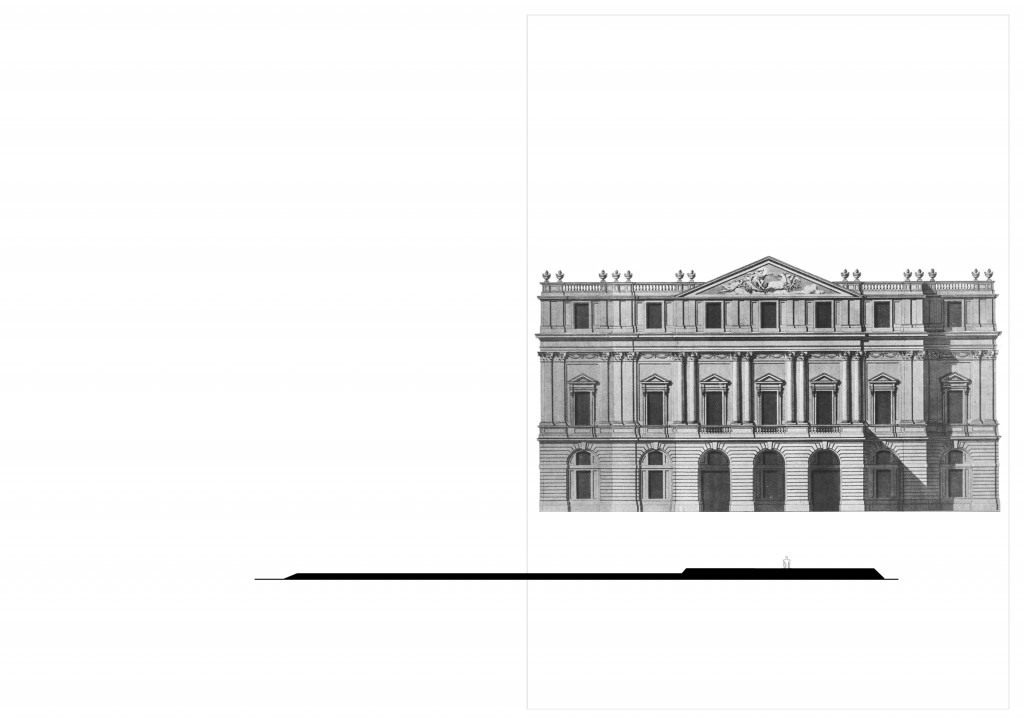 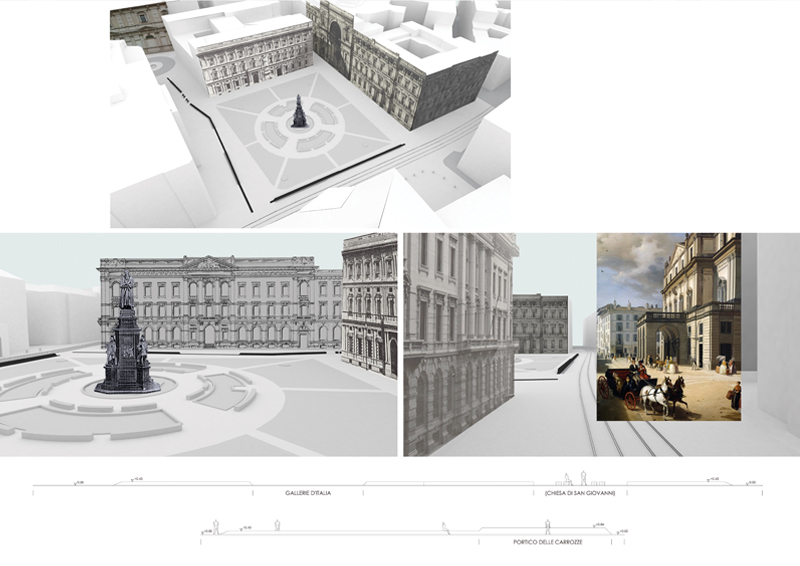 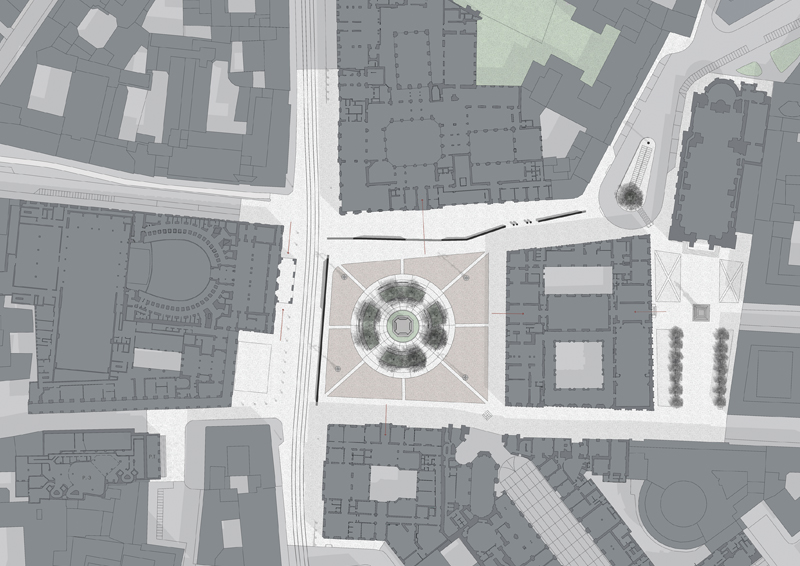 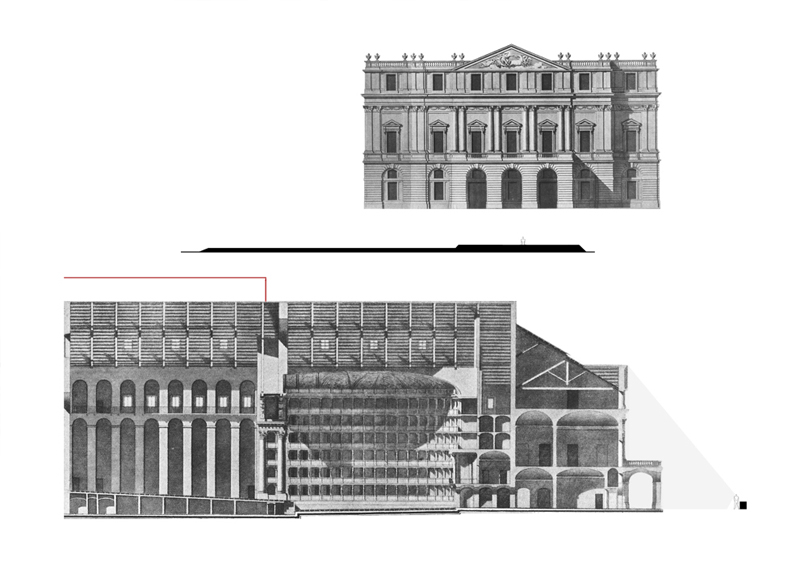 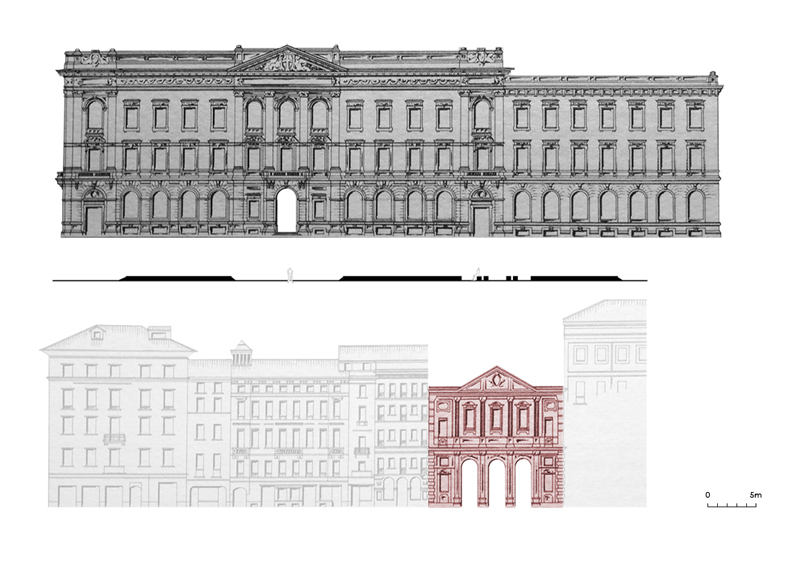 “ The facade of the new theatre…it almost disheartens me” these were the words that Pietro Verri wrote in 1778 after observing La Scala, that had just been freed from its scaffoldings, “the portico juts out…and that facade, it doesn’t even have a proper square in front of it.”.
Instantly, the Milanese’s public opinion is inflamed by the misinterpretation of Piermarini’s architectual expression and by the lament of a missing square in front of a facade which was conceived and related to that exact cotext, either seen partially or at a very close distance.

Eighty years later we assist in the demolition of the square in front of the theatre, with no consideration to the urban distortion of the balance in Piermarini’s drawings. The architect Luca Beltrami, by reorganizing the new empty area , seemed to be reducing  La Scala to a simple monument, ignoring its master makings. This caused a mistaken collateral effect of the sense of the building, with an unexpected view of the roofs and of the technical volumes. With the theatre recent intervention of restoration, and the new scenic tower, its original appearance has been even more distorted.
We believe today  that a re-examination of the interrelation between the square and the facade of the theatre could re-establish ,even in an “abstract” way, the quality of its design in the logic of its original context.

The ornamental concept from the 19th century and Portoghesi’s later decorative work (2000) are conserved. The flooring of the square continualy extends to the facades of the buildings, reversing on their lateral prospects. They are now set together by a common institutional value as they seem to be attached in a sort of assembled system which creates a cultural “Agorà”.
On the homogeneous surface of the square, an antique sign resurfaces: traces of the construction curtains of the Corsia del giardino and Contrada di San Giovanni, synthesized by two Black granite orthogonal sculptural elements that recalls the missing “block”, bringing to mind the original surrounding.
The theatre facade is once again legible, crowned by the tymapnum and the balustrade with flaming vases, not altered by the pressure of the overheaded volumes.
The black granite installment creates a sort of pavise facing the entrance of Gallerie d’Italia and brings back to the surface  the traces of the colonnade once belonging to the demolished San Giovanni’s Church.
The vague archeologic inspiration of the installation doesn’t disregard the 19th century dominant environment but instead enhances it with a significant contemporary architectural sign.
Its elevation describes its nature as an indeteminate element: it can be the limit, obstruction or a passage by based on its own dialogue with opposite presence. Situated on one of the inclined levels that link the installments varied heights, a bronze philological plaque illustrates its historical beginnings.